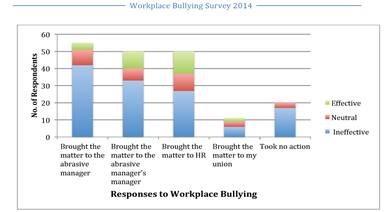 Last month I provided information on the Workplace Fairness Conflict, Bullying & Harassment Support Line which ties nicely into a new survey I came across from Kali Matsuhashi of Executive Confidante.

Key findings of the survey:

The definition of workplace bullying used for the survey was as follows:

Workplace bullying is a profound lack of respect, in word and action, toward co-workers and subordinates.  Bullying and disruptive or abrasive behaviours aren’t just those that are annoying or difficult to put up with over time. There is a consistent pattern of disrespect that is enabled by and emphasizes the power differential between boss and co-worker or subordinate.

One off incidents of shortness or incivility do not constitute workplace bullying.  To meet the definition of workplace bullying, there need to be a pattern of abrasive, disruptive, or bullying behaviours over some period of time.

The survey lists abrasive behaviours to include:

As indicated below the responses to Workplace Bullying were generally ineffective. 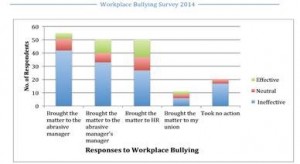 Organizations often have little in place to deal with the issue or choose to ignore it.  This can have a significant impact on the bottom line.  We have seen how instituting conflict management systems early can be successful in dealing with issues of bullying and harassment.  Proactive is effective.

The Workplace Fairness Institute works to support organizations to be proactive with conflict in order to effectively address bully and harassment in the workplace.